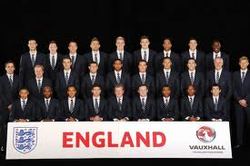 Mighty 3 lions prior to leaving for the Euro's
So Roy's Hodgson's first tournament as England boss has finished and I feel it's good chance for us at iwannabeadored to rate and review England's performances at the Euro 2012 championships.

So first up for the 3 lions was on paper England's hardest game of the group a tough tie against former world & European champions of recent times France. The game was played on the Ukrainian city of Donetsk home of Shakhtar Donetsk, the game was played in baking conditions which speared to catch booth sets of players by surprise in the early exchanges.

England played a familiar starting line up although there was one surprise inclusion in the starting 11 and that was the inclusion of Alex-Oxlade Chamberlain. England started well without really causing the French problems.

The French side contained all the usual stars such as Mexes, Ribery, Benzema & Nasri.

It was apparent early on that both sides seen each other as the group’s main rivals even though it was the opening round of games seemed happy to spar without delivering a knockout blow, then on 30mins of the 1st half a wonderful ball by skipper Steven Gerrard that was met impeccably by the unlikely head of Joleon Lescott to put England 1 up, the lead was short lived through 9 minutes if fact was all the it  was as the English back four started to drop deeper Samir Nasri managed to unleash a shot that beat his Manchester City team mate Joe Hart through a crowd to make it 1 all. The game played out that way with England and France both struggling to find the killer pass that would lead to a winner. Overall England can be very proud of the performance with Steven Gerrard particularly pleasing in his midfield role.

Next up was Sweden and another potentially tricky tie for the 3 lions, with Wayne Rooney still missing through suspension Roy Hodgson decided to make changes to his starting 11 with Andy Carroll coming in pairing Danny Welbeck and his faith was repaid instantly as Carroll rose wonderfully to head come a Steven Gerrard cross to put England 1 up on 23 minutes. England held the lead at the break after some consistent Swedish pressure. The second half started just as the 1st half ended when Sweden pressing for an equaliser and on 49 minutes a header by former Aston Villa defender Olaf Mellberg was partially saved by Hart and as Glen Johnson desperately tried to keep the ball out he could only hit the ball against the post scoring an own goal. Ten minutes later and Sweden went into the lead after England conceded a needless free kick Bendtner whipped in the free kick and the unmarked Mellberg was unmarked and head past the helpless Hart. On 61 minutes England changed it a brought on Walcott for the ineffectual Milner and 3 minutes later Walcott smashed the ball past Isaksson in the Sweden goal to pull England level, on 74 minutes England   re took the lead when Danny Welbeck got a deft touch on Theo Walcott's cross. That's how it finished 2-3 to England. This result meant Sweden crashed out and England only needed a point against Ukraine to qualify for the knock out rounds.

Off to the city of donetsk and the magnificent Donbas arena for a game that England only needed a point to ensure qualification although finishing runner up in the group would mean a tricky quarter final tie against the reigning world and European champions Spain, England welcomed back there star striker Wayne Rooney after sitting out a 2 game suspension and it was the joint host nation Ukraine that impressed in this game, the hosts kept their talisman and 2 goal hero andriy shevchenko on the bench, it was Ukraine that largely impressed in this game and where unlucky not to get a point at least, although it was England who scored what turned out to be the decisive goal and of course it was inevitably was Rooney who got it. The goal came after the break in the 48th minute when a delightful low cross by the skipper Steven Gerrard is missed by everyone in the Ukraine's back four and was headed home by Rooney to put England ahead. On 62 minutes England got a huge slice of luck for once when Marko Devic had wriggled through, with his shot looping up from Joe Hart's attempt to block and arcing into the goalmouth, only for John Terry to recover and hack the ball away. Replays later proved that the ball had infancy crossed the line and should of stood but after the incident in South Africa against Germany in 2010 England will feel justice has been done, the incident will again awaken the call for goal line technology to be introduced. The game finished with just the one goal and with France beaten in their final group game by Sweden England won the group and avoided Spain to play Italy in the quarter finals.

So England faced the Italians in the final quarter final game  knowing the winners would meet Germany in the semi finals, so both teams had to be on their game if they where to come through the tie, unfortunately got England it was the same old story we just weren't at the races in terms of
performance when I mattered and it was in fact the Italians that impressed in this tie,

Cesare Prandelli started with the sometimes frustrating but at times the outstanding Mario Balotelli, Mario led the line well for the Italians but it was another Italian that actually impressed most Andrea Pirlo, the little maestro pulled the strings in midfield with every move seemed to go through Pirlo, it's created a few chances with the likes of Ballotelli, de Rossi and Montolivo all missing guilt edge chances to put Italy ahead. England did have a few chances too but were unable to beat Buffon. So after 90mins and no one finding a breakthrough the game went to extra time and like most of the match England seemed to be chasing the Italians trying to get the ball, in the second half of extra time the Italians thought they had won it when AC Milan's Nocterino headed in at the back post only to be marginally offside. So the game went to the dreaded penalties and if England wanted to win they would have to break their recent pens curse, 1st was Balotelli who fired home, Gerrard then took England's and smashed it past Buffon, Montolivo when smashed his kick wide of Harts post advantage England, Rooney fires England ahead maybe just maybe we can do this, next up for Italy was Pirlo who calmly chips down the Centre to put the score at 2-2, Ashley young wad next up for England but his powerful
kick smashed off the bar oh dear England always seem to do it, Nocterino stepped up to put the Italians ahead 3-2, up stepped Ashley Cole for England but his tame spot kick was easily saved by Buffon, former West Ham player Alessandro Diamanti fired past Hart to put England out and set up a semi final with Germany.

So overall England won two of their group games and drew with the French but ultimately lost out on pens to Italy but overall they can be very proud of what they have achieved under the circumstances, new manager, injuries to key players & Rooney's suspension although the later wasn't
really an issue, Hodgson can take some positives like performances from Gerrard and Johnson who where England's stand out performers IMO, do what next well it's the small matter of qualification for Brazil 2014 so come on let's get behind the boys and who knows maybe 2014 is our
year!!!!
Powered by