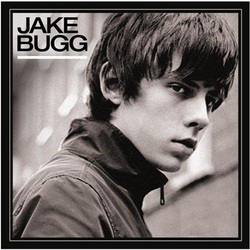 Next up is an album that is so good I would make the boldest of statements saying that "it is in my opinion one of the best debut albums EVER", yes bold I know but trust me it certainly is one of the top 5 debuts along with Oasis, Stone Roses, Arctic Monkeys to name a few, I give you the self titled album by JAKE BUGG.

You can tell a lot by the opening tracks on an album in my opinion and this is no different, right from the opening track "Lighting Bolt" a track that the BBC used for the Olympics in London when Usaine Bolt raced, next up is "Two Fingers" lyrically this song is near perfect with lyrics that will probably stick in people's heads for a few years to come, it's also worth mentioning the video which features. The brilliant Vicky McClure from "This Is England" fame.

Next up is the rockier "Taste It" with some more brilliant lyrics that prove at 18 years old Jake is a brilliant song writer  already.

"I Seen It All" is next this is one of my favourite songs on the album, not just lyrically but there is also a brilliant baseline in this song.

"Broken" is the half way song on the album that screams out David Gray in places mixed with Neil Young again.

"Troubled Town" is a return to the rockier style from earlier in the album.

"Ballad of Mr Jones" is a hauntingly beautiful song.

Another favourite song of mine is "Slide" that has a catchy chorus.

"Someone Told Me" simply one word WOW

"A Note To Yourself" is a slower ballad that is IMO influenced by Simon & Garfunkel.

"Someplace" is in my opinion the weakest song on the album but don't get me wrong it is still a beautifully written song that will have you singing along.

Finally the last song on the album is "Fire" that is a 50's inspired song with both its sound and its lyrics.

After Jake supported the mighty Stone Roses in there Heaton Parkreunion gigs Roses front man said "he was very brave" singing them songs, you decide if Jake is brave or just a unique song writer.

So judge for yourself but am sure you'll agree Jake Bugg will be around for years to come.
Powered by