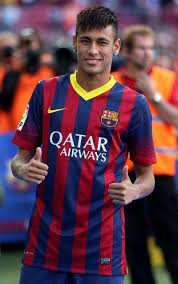 Neymar da Silva Santos Junior or as we know him just plain old Neymar has become Barcelona’s latest South American import at a staggering £48.6 million pounds (€57m) but will he be able to justify this staggering transfer fee or will he become one of Europe’s expensive flops? Am sure if there is any South American readers of ADORED would probably say that this is a bargain piece of business by the Catalan giants but If his recent performances against England are anything to go by then this looks like poor business by Barca but let’s not forget though Barcelona very really get it wrong when it comes to up and coming talent in my opinion.

So what’s all the fuss about, here goes Naymar was born in Mogi das Cruzes in the state capital of Sao Paulo Brazil on the
05th February 1992 making him 21 years old, Neymar started his football career as a youth at Portuguesa Santista between 1999 -2003 and from there he moved on to Santos where he has progressed from their youth set up to the first team and from there he was signed by Barcelona and he has signed a 5 year deal at with a reported release clause of £162m (€190m).


His time in Brazil had been very successful for him having played 103 games for Santos scoring a staggering 54 goals giving him
a goals per game record of 1.9 goals per game and when look at Falcao’s record of 208 games and scoring 127 goals his goals per game is 1.7ish his reported transfer fee of a reported €60m Barcelona do seem to have acquired something of a bargain. Neymar made his Santos debut in 07th march 2009 when he came off the bench in a match against Oeste at the age of only 17, a week later he scored his first Santos goal against Mogi Mirim Neymar finished the season with 14 goals in 48 games. The following season saw Naymar continue his ascendancy in Brazilian football scoring 5 goals in a game against Guarani in a 8 -1 rout for Santos in the Brazilian cup in which he scored 19 goals in 14 games earning Santos the 2010 Campeonato Paulista and after a 5 -5 draw with Santo André Santos where crowned as Champions and Naymar was awarded the player of the tournament and in doing so has earned comparisons to other Brazilian legends such as Robinho and Brazilian legend Pelé. Santos rejected a £12 million bid from West ham & also a £20 million pound offer from Chelsea with the player reportedly saying “I am focused on Santos”. 2010 wasn’t without controversy for Naymar though as he was repeatedly accused by his fellow players of diving when tackled, he also led to his managers sacking in a game against Goianiense on 15th  September 2010 his manager removed him from penalty taking duties based on the fact he had missed one in the final of the Copa do Brazil final earlier that year Neymar had to be calmed down by the linesman after turning his back on Dorival Junior the fallout of which led to Junior calling for Neymar to be
suspended and when the board backed there star player Junior was sacked by the clubs board.

2011 also proved successful for Santos as they went on to win their first Copa Libertadores triumph since 1963 and the days of Brazilian legend Pelé playing for the club. 2011 also seen Santos report Real Madrid’s president to FIFA for reportedly getting Neymar to sign a pre contract agreement and in fact it work in favor for Santos as Neymar extended his contract until after the 2014 World cup finals in his home country the deal also favoured the player as he had his wages increased 50% in the deal. Santos also competed in the 2011 FIFA Club World Cup at the Toyota Stadium in Toyota, Japan, but failed to score against Barcelona in the final where Santos were defeated 4–0  finishing runners up in the competition.

2012 saw him achieve a milestone in his career when he scored his 100th league goal at the age of 20 years old which is some achievement for the lad, Santos again went on to win the Campeonato Paulista with Naymer scoring 20 goals and being voted the player of the tournament, he also finished the joint top goal scorer in the Copa Libertadores with 8 goals but in which Santos failed to win losing over 2 legs to Corinthians in the semi- finals but winning the 2012 South American Footballer of the Year that year.

2013 saw the end of this chapter in Neymar’s Santos career as he played his last match for Santos in a goalless draw against Flamengo on 26 May 2013 as he sealed that dream move to Europe in fact on 18 March 2013, Neymar told that he had a "dream of playing in Europe, for a big club like Barcelona, Real Madrid and Chelsea." But he went on to say: "There's no point in speculating when I'll leave Santos. I'll leave when I want to." On 24 May 2013, Santos announced that they had received two offers for Neymar, the following day it was announced that he had in fact agreed to join Barcelona.

Neymar has also been capped by his country at U17, U20, U23 & the senior team when he was capped 10th August 2010 against as an 18 year old against USA and in which he scored a header after only 28 mins, although in a game at London’s emirates stadium Neymar accused the Scotland fans of being racist when a banana was thrown onto the pitch after he had scored from the penalty spot although it was later revealed that it was in-fact a German student that had in fact thrown the Banana. Neymar has also represented Brazil in the 2012 London Olympics and receiving a silver medal as Brazil made it to the semi-finals.

So it appears the Boy Neymar has certainly been successful to date will he be successful in Europe only time will tell one thing is for certain the Boy won’t be far away from controversy if his early years have been anything to go by.
Powered by