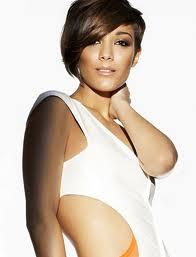 Sexy Sandford
In this instalment of I-Candy I am welcoming an absolute cutie, I give you the stunning Frankie Sandford.

Frankie was a member of the S club 7 spin off group S club juniors along side current Saturdays member Rochelle Wiseman.

Frankie has had some high profile relationships recently and is currently dating Sunderland full back Wayne Bridge. Frankie has also dated Mcfly's Dougie poynter and when the pair split up franjie received death threats
from some of his fans.

Frankie constantly wins awards for her looks or as a style icon, she has also featured in adverts for Nintendo cats & dogs vidoe game, veet and impulse.


Frankie has also had some demons to overcome recently as she has been treated in rehab for an unknown illness thought to be drugs, drink or an
eating disorder since october 2011 and was ordered by doctors to take time out from the Saturdays.

She has a tattoo of a star on her wrist and also a star on the back of her neck with the words ”sunshine n showers".

Hopefully she is on the mend and we can see more of miss sandford in 2012 coz in my opinion she's a welcome addition to I-Candy.
Powered by