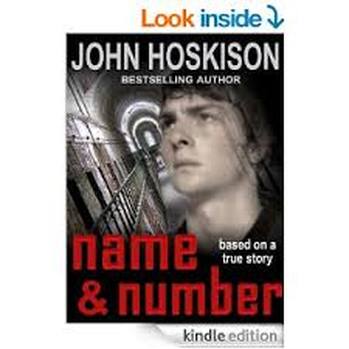 Name and number by former European golfer turned writer John Hoskison is based on a true story, 18 year old Art Student Nick Wood is sentenced to 2 years in prison for being stupid, he was convinced by someone to sell a few ecstasy tablets at a party but things took a turn for the worst when his girlfriend Jessica took Ill off the tablets resulting in Nick's arrest and subsequent conviction.

Nick hopes his sentence will be served at an open prison but soon realises that life inside one of her majesty's prisons HMP Blackthorpe isn't going to be the experience he hoped for. HMP Blackthorpe is known for being an outdated prison full of squalor where new inmates are the target of the prisons drug dealers and bully's, especially a prisoner known as "The Dragon" to the other prisoners mainly due to his neck tattoo and it isn't long before the Dragon can see that Wood is easy an prey. Nick also attracts the attention from another source in prison, Tom Hawks is serving life in Blackthorpe and young Nick has already caught his eye too.

Nick soon realises that he needs to earn money to survive in HMP Blackthorpe as his wages just aren't going to be enough to keep the Dragon away from inflicting punishment on Wood if he fails to pay the protection money, Wood seeks out another form of income and it is apparent to him that he can make extra in the putting his art talents to good use painting and possibly having some of his paintings sold in the visitors area.

Although nick manages to keep the Dragon at bay trouble is stirring in Blackthorpe, a grass is spilling his heart out to the governor and tensions are high especially amongst the lifers who intend to flush out the grass and restore balance inside the prison before all hell breaks loose, in the turmoil Nick and Tom's path cross and they discover the identity of the grass and form a dangerous plan to restore the prisons balance but in order to do that Nick must face the Dragon one last time.

John Hoskinson is a former European PGA tour golfer who back in 1994 after a golf match he had a drink or two before driving home but during that journey he tragically killed a cyclist and was sentenced to 3 years in prison, while John was in prison he received a letter from the widow of the cyclist in which she offered John the most incredible Christian-like forgiveness when told him that She hoped that somehow he would survive prison, that served as a catalyst for john and he decided if he got out of prison he would educate people of life behind bars and hopefully educating people not to make mistakes like he did. He also wrote a this book which has been given critical acclaim and even Lord Ramsbotham (Inspector of Prisons), who said it should be mandatory reading for anyone working in the prison service.

This is a really well written heart-warming story that I really couldn't put down, this is not the longest book in the world but the story really flows in fact so much so that you could probably read this book in no time, like I did.