Love him or hate him, Joey's a character 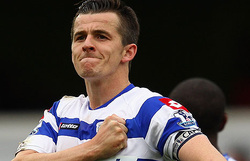 Joey Barton showing his passion
Joey Barton is footballs equivalent to that beefy spread Marmite that is always used to describe things we generally dislike these days but whether you hate him or not Joey Barton's antics on and off the field will be gracing the front and back pages for years to come.

Joey Barton is or has been the engine room of most clubs he's ever played for over the years, he can pass, tackle and he has a half decent shot on him on his day but unfortunately Barton's fiery side has ruined any chance he had of becoming one of this country's top players both domestically and internationally.

Joey was born on September 2nd in the district of Liverpool known as Huyton.

Barton's youth career lasted from 1997 - 2002 and started at Everton but ended at the team that gave him his professional football break man city.
City gave Barton his debut on the 5th April 2003 against north west rivals Bolton wanderers although Barton's debut was originally due to happen in November of the previous year against Middlesbrough but Barton managed to lose his team shirt at on the bench at half time. 2 weeks later he scored the 1st of 15 goals in 150 games for city against spurs on Good Friday. That summer Barton was offered a 1 year deal by city manager Kevin Keegan. He started more games for city that season and after scoring his second premiership goal for city he was rewarded with an England U21 call up for 2004 European championships.

He received his 1st senior red card against spurs at the lane with city trailing 3 nil at half time he was sent off for arguing with the ref, with 10 men city won 4-3 no thanks to Barton! The season ended with him playing 39 times for city and being named young player of the season. July 2004 Barton sparked a massive brawl in a friendly game against Doncaster rovers when he committed a nasty tackle on a Doncaster player.
Barton's next major flashpoint came during Manchester city's 2004 Christmas party when he caught youth team player Jamie Tandy trying to set fire to his shirt, Barton then proceeded to put out a lit cigar in Tandy's eye, he later apologised and was fined 6 weeks wages (60k) by city.

It wasn't long before Barton was in the headlines again for the wrong reasons, this time Barton broke a 35yo mans leg when he hit the pedestrian at around 2am one morning in May 2005 in his home city Liverpool.  In the summer of 2005, Barton was sent home from a pre-season tournament in Thailand after assaulting a 15-year-old Everton supporter who had provoked Barton by verbally abusing him and kicking his shin. Barton had to be restrained from attacking the boy further by teammate Richard Dunne, manager Stuart Peace fined Barton 120k for the incident. In January 2006 Barton handed in a transfer request which city immediately rejected and a week later Barton admitted "he's been a bit impetuous" and stated he was ready to commence negotiations on a new contract and on July 25th he put pen to a new 4 year contract at city.

His behaviour appeared to improve however, on 30 September 2006, television cameras captured Barton exposing his backside to Everton fans, following City's injury-time equaliser in a game at Goodison Park. In December 2006 Barton received a second red card of his career after being sent off against Bolton wanderers for a 2 footed tackle on Abdoulaye-Diagne-Faye.

After impressing with his club form Joey received an international call up for England in February 2007 for a friendly against Spain, this raised a few eyebrows due to Barton criticising many members of the 2006 world cup squad for their poor showing in the tournament in his autobiography, although one player Steven Gerard who he criticised strangely publicly backed Barton praising him for his honesty. He was arrested on suspicion of assault and criminal damage after an alleged argument with a taxi driver in Liverpool while going to his hotel after a match on 13 March 2007. He was cleared of this charge in May 2008. Barton's time finally come to an end after a training ground fracas with teammate Dabo, who pressed charges against Barton, he received a four month suspended sentence, 200hrs community service and fined £3000. The FA also got there pound of flesh by charging Barton with violent conduct banning him for 6 games and fined £25k.

Barton left city for 5.8m although the original fee agreed was 5.5m city refused to pay Barton 300k owed to him for leaving without handing in
a transfer request, this was added onto the transfer by Newcastle to enable the deal to happen. Barton made is Newcastle debut in a friendly against Hartlepool on 17th July 2007, four days later Barton did his metatarsal and was ruled out for 7 weeks. His premier league debut finally came against spurs in October 2007. After not really having much luck with niggly injuries in his first appearance in over three months on 3 May 2009, Barton was sent off late in a 3–0 loss to Liverpool at Anfield for a sliding challenge on Xabi Alonso. The red card ruled Barton out of Newcastle's remaining three games of the season, with the club in danger of relegation from the Premier League. Newcastle manager Alan Shearer raised doubts about Barton's future at the club saying "I think it would be wrong to discuss his future now, but I'm not very happy. Barton it’s fair to say never got on with Newcastle manager Shearer and at one point publicly calling him "a prick", in Barton's defence I think too many ex pro's are over opinionated on today's players behaviour let’s not forget they had their chance and to be honest most of them where boring off and on the pitch. He started his new club season 2010–2011 as a first team regular, playing against Manchester United on the opening day. On Barton's and Newcastle's second game, he scored against Aston Villa in a 6–0 victory for Newcastle. Immediately, after the game Barton removed a moustache which he had pledged to not shave until Newcastle United had won a game in the new season. On 10 November, in a 2–1 defeat to Blackburn, Barton again acted violently, punching Morten Gamst Pedersen in the chest. He was not punished during the game as the officials did not see it but
was later handed a 3 game ban which he accepted. Another spat followed when Barton clashed with Abou Diaby or Arsenal when the gunner was sent off after a strong tackle by Joey resulted in Diaby reacting and shoving Barton to the ground, it's with mentioning that Barton scored 2 pens as Newcastle came from 4 nil down to draw 4 - 4.

Barton left Newcastle on 26th August 2011 to join QPR just before leaving Joey publicly thanked the Newcastle fans, apparently before deciding to join QPR it's rumoured that Barton was considering signing for Arsenal he was involved in an incident with Gervinho and Alex Song with saw Gervinho sent off.

Barton was made QPR captain by Neil Warnock, Barton's 1st red card in a few years came in January 2012 in a game against Norwich when Barton head butted Bradley Johnson. QPR lost the game 2-1 and soon after Warnock was replaced by Mark Hughes. Barton remained club captain under Hughes and in a game against Liverpool which QPR won 3-2 Barton was booed by home fans, later on twitter Barton honestly admitted that was the  worst performance of his career to date, Joey being Joey though also had a go at the QPR fans for not backing the team in the fight against relegation. On may 13th the final day of the league season Joey returned to the club he started out in league football Man City in a game
that could and would see City as champions and was equally important to QPR as they could either survive or go down depending on results then in the 55th minute Barton was given a straight red for kicking out at City's own troubled striker Carlos Tevez, but what followed can only be described as a moment of madness with city's players surrounding Barton in protest Barton kicked Sergio Aguerro in the back of the knee and attempted a head butt on City captain Vincent Kompany, Barton only left the field after he was dragged away by former team mate Micah Richards, QPR led the game with 10 men but in a bizarre twist of fate City scored 2 injury time goals to win the game 3 - 2 and clinch the title but that still didn't relegate the Londoners who survived at the expensive of Lancashire Neighbours Bolton Wanderers. That evening Match of the day duo’s Lineker and Shearer began a war of words with Barton that continued on twitter for the following days. On 23rd August Barton was handed a 12 game ban and fined £75k by the FA. In early June 2012 Barton was arrested after a fight in the early hours of the morning outside Liverpool's super club Garland’s.

Barton's life and career had and to a certain degree will always be publicly scrutinised but my final thought for you all is this how boring would today's game be without players like Barton and previously Robbie Savage? Do they not put bums on seats because we all want to see or be there when the next controversial incident happens with these characters!