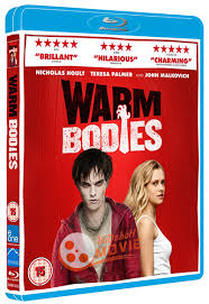 Next up is the romantic horror comedy Warm Bodies based on the book of the same name by American author Isaac Marion it's a tale of Zombie love sounds weird right but this is actually a really refreshing movie.

The film stars English actor Nicholas Hoult who found fame in the 2002 British movie "About a boy" alongside Hugh Grant and he also started as Tony in TV's skins.

Hoult plays R a corpse / zombie from an undefined apocalyptic event that has left America ravaged with the dead roaming the land alongside Bonies which are skeleton like zombies that are devoid of flesh and have a hunger for anything living.

The film is narrated by R from his perspective which is actually really original in my opinion which adds to the emotional depth that the movie plays on, as he and the other corpses roam around the airport and the city looking for food, R and his small group of corpses come across a group of  survivors looting a drug store and in true zombie fashion R kills Perry a human and in doing so something else happens to R he feels something he hasn't felt  in a long time LOVE, R falls for his victims girlfriend Julie who was with  Perry and the other survivors, Julie is played by Australian actress Teresa  Palmer. R helps Julie escape the other corpses but as R has become totally  besotted by Julie he devises a plan to keep her at the airport for a few days so he can hopefully connect with her, After a few days Julie wants to return to her father general Grigio who is the leader if a band of survivors intent on keeping the corpses away from the survivors. Julie and R escape the airport after a group of Bonies turn on R and his friends, the corpses are changing, they are beginning to remember basic human functions like friendship and love! They are becoming almost human again well sort of.

When the survivors camp is threatened to be attacked by the Bonies who are in hot pursuit of R & Julie the pair try to convince Julie's father general Grigio played by John Malkovich that the corpses are changing and that they are showing signs of becoming cured with their help they can team up and destroy the bony threat once and for all and ultimately change the survivor / corpse relationship for ever.

The movie is a brilliant take on the romantic comedy with the zombie element it makes the film so much more accessible to both men & woman. To cap it off the movie is blessed with a fantastic soundtrack that consists of Guns & Roses, Bruce Springsteen, Bob Dylan, Jimmy cliff and many more.
Powered by