One to watch (Max Power) 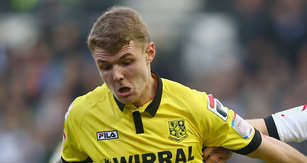 Next up is a player with possibly the best name EVER for a footballer, would the real Max Power please stand up.

This young midfielder has burst on the scene recently in league one were he's stepped up to the mark in Tranmere Rovers rise towards the dizzy heights of a  possible promotion place.

Max has been at TRFC since the tender age of 8 years old were he's has captained sides at every age level during this time and its clear to see for most Tranmere fans that Max certainly has the potential to be a future senior team captain.

He replaced Andy Robinson, Power actually scored in the shoot out victory for Tranmere in the same game, that season wasn't successful for Max as
he struggled to make an impact in the Rovers team as they struggled at the wrong end of the table for most of the season making just 4 appearances in total.

Although there was a change of manager at Tranmere Max showed fans who regularly attended reserve games of the player he had the potential in becoming by possessing a brilliant shot on him and proving that he is a combative box to box midfielder.

Max was rewarded a new contract at Tranmere for the 2012 / 13 season by Ronnie Moore, although this season saw Power pushed down the pecking order at his boyhood club by the arrivals of James Wallace and the on loan Liam Palmer He still managed to bag his 1st ever professional goal in an FA Cup 1st round tie away at Braintree scoring a well placed finish after some neat play by another TRFC youngster Cole Stockton. This turned out to be a memorable week for the youngster whose partner had the couple’s first child the same week.

An unfortunate injury to rovers captain James Wallace seen Max start to break into the first team and he scored his first league goal a delightful effort into the top right hand corner against Crewe on Boxing Day in Tranmere's 2-1 win, he scored his second league goal in a 1-5 rout
for Tranmere away at Colchester in February 2013.

Power was building a reputation at Tranmere as a bit of a screamer specialist as his 3 rovers goals so far had all been a bit special this was again confirmed when Max scored another delightful strike in a game against Oldham at home when he won a fifty fifty challenge and burst through the latics defence placing the ball inside the near post in a vital 1 nil win.

Powers superb displays this season has seen thelub reward the youngster with a new deal till 2015 and if max carries on progressing I can see him becoming a future senior club captain at Tranmere in the years to come.

Young Max is certainly a candidate for Tranmere's young player of the season and possibly goal of the season with his strike at home to Crewe but i am sure with a few more games remaining this season we probably haven't heard the last of young Mr Power's headline making qualities this season just yet.
Powered by