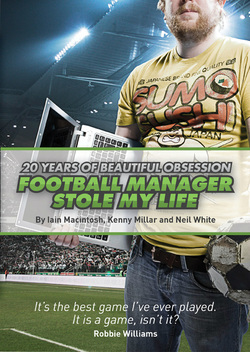 If you’re a male, born after 1970, love football and own a computer it's safe to safe who have probably played and become addicted to Championship manager / Football manager as its now know! Am I right? Well if that's the case next is a book that you SHOULD read, the aptly named "Football manager stole my life".

The book is a series of articles, interviews with the games creators, celebrity's footballers both past and present who have been hooked by this game over the years.

The book also catches up with some of the so called "Wonder kids" like Nii Lamptey, Kennedy Bakircioglu & Cherno Samba to name but a few that the game has identified over 20 years the game has been played, these wonder kids have been found by the games huge amount of unpaid scouts around the world. Did these kids
amount to the hype? Well you'll have to read the book to find out.

I loved this book as it brought back memories of the earlier games that I use to play for hours and hours each day but as I have got older and had a family my time playing the game has become very seldom as my girlfriend huffs & puffs at me each time she sees the games intro loading up.

One last question for you, has football manager stole your life?