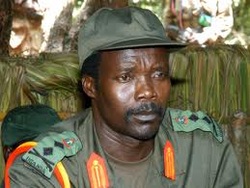 After watching the recent hit movie Machine gun preacher the story of Sam Childers a former drug taking biker who finds god and sets out to
help the children evade exploitation from Kony and the rebels in Africa, I decided that I wanted learn more about the events in Sudan & Uganda because what happening there is truly horrific and shouldn't take a movie to highlight
the atrocities in Africa by Joseph Kony.


Kony was born in 1961 in the Odek a village just east of Gulu in northern Uganda, Koney is the son of a Catholic farther and an Anglican mother,
he was an altar boy till he was around 15 when he gave it up as well as dropping out of school and apprenticing as the village witch doctor with his older brother Jamie Brow until his brothers eventual death when Kony took over the position.

Kony first came to prominence in January 1986, as the leader of one of the many groups that sprang up in the wake of the wildly popular Holy
Spirit Movement of Alice Auma (also known as Lakwena and to whom Kony is thought to be related).

Kony, along with a small group of followers, first moved beyond his home village of Odek in 198, A few days after leaving, he met with a small
group of former Uganda National Liberation Front soldiers and managed to recruit them for his group. His first raid was on the city of Gulu.

Kony's group was originally called the United Holy Salvation Army (UHSA), and was not perceived as a threat by the NRA but by 1988 it had
become a major player in Ugandan affairs.

Konys group where originally called United Holy salvation army (UHSA) and with the UPDA founder Odong Latek who had become unsatisfied with the UPDA and joined UHSA like many other UPDA followers joined Konys group and it was Odong who convinced Kony to use standard military tactics instead of Konys normal way of attacking in cross-shaped formations and sprinkling holy water.

The new tactics proved very successful, and the UHSA won several small victories against the NRA. The NRA responded by significantly weakening
Kony's group through a military campaign named Operation North. The operation was devastating to the UHSA and, with their numbers reduced from thousands to hundreds, they engaged in retaliatory attacks against NRA collaborators and terror against general civilian population this was the reason he has become a wanted man for his crimes against civilians.

The bulk of Kony's foot soldiers were young children mainly boys While estimates of the number is unknown but some people put the figure as high as 104,000. When abducting the children, Kony and his army often brutally killed their families and neighbours, thus leaving the children with little choice but to fight for him.

In 1992 Kony renamed the group the United Democratic Christian Army and some say to escape the bad reputation the group had already earned, For a decade, starting in the mid-1990s, the LRA was strengthened by military support from the government of Sudan, which was retaliating against Ugandan government support for rebels in what would become South Sudan.

In 2005, the International Criminal Court (ICC) announced that arrest warrants had been issued for five members of the Lord's Resistance Army for crimes against humanity.  The next day Ugandan defense minister Amama Mbabazi revealed that the warrants include Kony, his deputy Vincent Otti, and LRA commanders Raska Lukwiya, Okot Odiambo, and Dominic Ongwen.

In an interview released in 2006 Kony proclaims, "I am a freedom fighter not a terrorist." But this is hatd to stomach as I don't know of any
freedom fighters that kill civilians in order to recruit foot soldiers. He has also told Reuters: "We don't have any children. We only have combatants showing his total disrespect for what he has and is doing to these young children.

The Ugandan military has attempted to kill Kony many times throughout the insurgency. In Uganda's attempt to track Kony down, former LRA
combatants have been enlisted to search remote areas of the Central African Republic, Sudan, and the Democratic Republic of the Congo where he was he was last seen but as yet his whereabouts are still unknown.

After the 11 September attacks, the United States declared the Lord's Resistance Army a terrorist group. On 28 August 2008, the United States
Treasury Department placed Kony on its list of "Specially Designated Global Terrorists".

No U.S. troops were directly involved, but 17 U.S. advisers and analysts provided intelligence, equipment, and fuel to Ugandan military counterparts. The offensive pushed Kony from his jungle camp, but Kony was not captured. One hundred children were rescued. The reason the yanks won't get
directly involved is probably they don't want a repeat of the events in Mogadishu in 1993 when they came up against rebels but came off worse suffering a major blow.

In May 2010, U.S. President Barack Obama signed into law the Lord's Resistance Army Disarmament and Northern Uganda Recovery Act legislation aimed at stopping Kony and the LRA. In November 2010, President Obama delivered a strategy document to Congress, asking for more funding to disarm Kony and the LRA. In October 2011, President Obama authorized the deployment of approximately 100 combat-equipped U.S. troops to central Africa. Their goal is to help regional forces remove Kony and senior LRA leaders from the battlefield. "Although the U.S. forces are combat-equipped, they will only be providing information, advice, and assistance to partner nation forces, and they will not themselves engage LRA forces unless necessary for self-defense.

On 23 March 2012 the African Union announced its intentions to "send 5,000 soldiers to join the hunt for rebel leader Joseph Kony" and to
"neutralize" him while isolating the scattered LRA groups responsible for 2,600 civilian killings since 2008. This international task force was stated to include soldiers "from Uganda, South Sudan, Central African Republic and Congo, countries where Kony’s reign of terror has been felt over the years." Prior this announcement, the hunt for Kony has primarily been carried out by troops from Uganda. The soldiers will begin their search in South Sudan on 24 March 2012 and that the search "will last until Kony is caught"

Until he is caught children will continue to be exploited by Kony and the rebels although there are various groups looking for Kony to bring him to justice he still thus far manages to evade capture, it seems strange to me they the world is waging war other terrorists like Bin Laden but doesn't hunt Kony like they did with Bin laden, if they did am sure he would of been captured and brought to justice by now.
Powered by