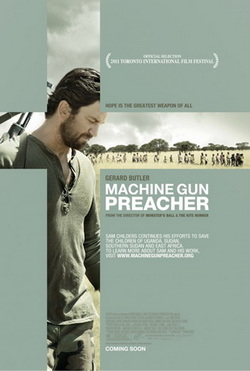 A word of warning this film isn't for the faint hearted although its not graphic it certainly touches on a controversial subject.

Anyway the film is based on real events and stars Gerard Butler (300, Rocknrolla) as Sam Chiders, A drug taking biker from Pennsylvania who after being involved in a violent confrontation he is persuaded down the path of god by his ex stripper wife turned catholic & the mother of his daughter.

He cleans himself up and starts his own construction company up, Sam becomes intrigued when a guest speaker comes to his church preaching about how people can help out in africa, sam decides that his construction skills would be a useful help in Africa and goes over to help out for a few weeks where
he learns about the political struggles, child exploitation by rebel leader Joseph Kony.

While in Africa he see's 1st hand the horrors that the people are enduring under Kony's reign in the African states of Uganda & Sudan. On his return to America sam is so touched by what he's seen he decides to build his own church that won't discriminate on who it helps people like he was bikers, drug addicts etc. while in America sam also decides he will return to Africa to build a remote orphanage.

When back in Africa his idea's of an orphanage anger Kony & the African rebels. After the rebels attack his mission Sam decides to fight back against the rebels and free the children that the rebels have taken from there family's.

When he eventually returns to America sam becomes more & more frustrated with the lack of help and support others are willing to give to the Africans which at times puts a strain on his own family relationships.

Butler is excellent as Childers and this film touches on a subject that most people refuse to acknowledge existed or exists still today,
this film at 123 mins long is certainly one of the best films of year to date.

If ye leave the film on while the credits are rolling there is some black and white footage of the real Sam in Africa which is worth watching.

Watch out in the random's section for an article on Joseph Kony in the future.