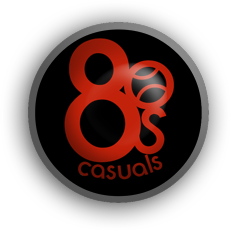 80’s casuals is an independent clothing  label from the north west of England who make garments for men and young boys based around the days of the when fashion and football was very much a religion. They started out making threads in 2003 which are loosely based around Football, music & movies originally from the flamboyant 80’s (hence the name) but the fashion is by no means just 80’s replicas their clothes are eye catching pieces of art that will certainly turn heads on your local terrace.

These products are reasonably priced & normally are only available for limited periods, so if you’re lucky to get one then you can be sure that you won’t see every Tom¸ Dick & Harry sporting these down the local boozer.
The clothes have been worn and endorsed by not just Casuals but even stars such as The Verve’s Richard Ashcroft and televisions Craig Charles who have been spotted wearing a distinctive 80’s casuals T-Shirt.


The clothes come in all sizes so even men of a bigger structure can wear their clothes although some styles come in British & Italian sizes, so just make sure that you choose the right option.

If you buy on line they do charge a nominal fee for delivery within the U.K.
Powered by