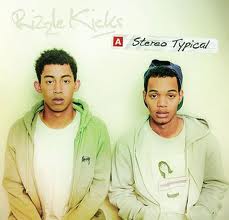 If you haven’t yet heard the Rizzle Kicks debut album “Stereo Typical” then I can assure you you’re missing out on an absolute gem of an album by the British hip hop duo originating from Brighton.

Am sure you have all heard “Momma do the hump” and yes it is annoying at first but after a few repeats of the album then you will find you’re self tapping to the beats just like the rest of the tracks on the album.

The Rizzle kicks consist of Jordan Stephens & Harley Alex-Sule until only recently where unknown on the music  scene, well in fact it was May 2011 they released their debut single the fantastically titled “Prophet” (better watch it). The duo where students at the Brit school which has stars such as the late Amy Winehouse, Jessie J, Adele & Leona Lewis to name but a few.

One of the outstanding tracks on the album is the fantastic “Travellers Chant” which in my opinion will be big on the disco scene this summer. The single reached No8 in the UK charts.

This was followed up by “Down with the trumpets”, they also appeared on Olly Murs single my heart skips a beat but don’t judge then on that
little mistake.

The albums consists of I would say 11 really good tracks with maybe 2 average tracks which could of possibly been cut from the final album.

One last thing “momma do the hump” was produced from that other famous Brighton musician Fat boy slim.

Hopefully the duo can continue this success and follow up “Stereo Typical” with a second gem of an album in 2012.