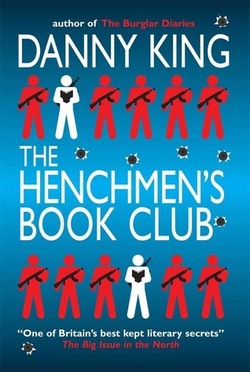 Ever wondered what an evil masterminds henchman does in their spare time when they are not defending bunkers or patrolling secret bases? If you have then I urge you to read Danny King's brilliant book
"The henchman's book club".

Mark Jones is a henchman for hire who has worked for some of the world’s most dangerous evil master minds such as Doctor Thalassocrat, Victor Soliman, Polonius Crump to name but a few just hoping to be part of one big successful plot so he can earn a big enough pay out just to settle his debts so he can just retire in peace in the countryside and enjoy his twilight years. Mark hasn't had much luck on that front so far so he is crippled with debts and a nagging mother in law who wants the money back the in laws loaned Mark before his last detail.

So while on missions that could last for an eternity and for the majority of the time are mind numbingly boring Mark and a group of other henchman have formed a book club where the group read and rate literary classics to help pass away the time in between patrolling, guarding or fighting off the many spy agencies out to spoil their employers evil plans.


That's how Mark Jones life really takes a turn for the worst when he is forced to help the people he's fought against all these years the good guys and with the help of the book club and its loyal members Mark sets out to right his wrong and prove to the world not all henchmen are bad they are just your typical guy next door.

This is a well written novel that is a cross between James Bond fused with Austin Powers and a dash of Rambo, Danny King has a really unique style of writing that allows the readers to relate with Jones and his struggles to be the good guy in an evil environment. Danny King is one of the UK's hidden gems in terms of authors in my opinion and his books should be read by anyone who likes action or a good giggle.