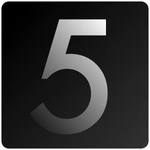 On the 12th September 2012 most of the techno geeks around the world held their breath in anticipation of Apple’s big announcement, the iPhone 5 given that last year apple announced a new hand set that at that
time everyone thought would actually be the Apple iPhone 5 but much to the disappointment all Apple did was slightly improve the iPhone 4 by releasing the 4s albeit with some pretty nifty feature’s like SIRI your own personal voice activated PA, they also put a better faster A5 processor allowing users a faster & better interface allowing multi-tasking.

Apple also updated the Antennae on the 4s due to what’s commonly known as antennaegate , this came about when the iPhone 4 was released it soon became apparent to users that if the bottom left corner of the handset was covered this affected the phones coverage as the metal sides on the phone acted as the antennae, even things like adding a case further reduced the phones coverage.

Apple have improved the antennae on the 4s in what they is the first intelligent phone on the market which has the ability to switch antennae so the caller receives the best possible signal thus increasing coverage and data transfer speeds from 7.2Mbps to an impressive 14.4Mbps on the 4s version.

So the iphone 5 was announced, what has it got that its older brothers & sisters haven’t, first off I suppose the biggest difference is the iPhone 5 is a 4g handset, what is 4g actually well it is an even faster download / upload speeds picking up where the current 3g networks stop, but aware though you have to be in an area that supports 4g currently, in the UK so these areas are London, Birmingham, Cardiff and Bristol is currently being tested ahead of launching. Then the following cities will have it rolled out by the end of 2012, Belfast, Derby, Edinburgh, Glasgow, Hull, Leeds, Liverpool, Manchester, Nottingham, Newcastle, Sheffield and Southampton.

The next change is a welcome one for anyone who uses the 4 or 4s for taking pictures the iPhone 5 has a better camera, well I say better it’s still 8mp but it has a built in option to allow the user to take panoramic pictures, Apple also have enhanced the lens allowing for a better quality picture to be taken in lower light conditions.

Next up is the processor and if you have had the 4 than a 4sand thought wow this is so much faster then prepare yourself for the A6 processor that’ll offer twice the processing power found in the iPhone 4S. Plus, it has twice the graphics power of its predecessor. Translation: speed, speed, speed

Then there is the screen Apple have decided that the way forward is increase the screen size in line with its major rival Samsung’s impressive Galaxy 3, Apple have done this by adding an extra half an inch to the screen, what does this mean in laymen’s terms well that’s simple basically they have added an extra row of Apps in the main screen, but what this also does is when the phone is rotated landscape you actually get a screen that is really the equivalent to 16.9 widescreen making viewing films etc so much better.

This brings me to the next point, I bet you’re thinking bigger screen bigger phone? And by this I mean heavier and thicker phone? Well you wrong ok the phone is bigger in height but apple have managed to make the device “18% thinner & 20% lighter” according to Apple.

The other feature worth mentioning is the iPhone 5 has an all new means of connectivity apple have replaced the old 16pin connectors with what they are calling “Lightning” Although this hasn’t gone down well with customers who own dock accessories who will have to either update the docks or more simply just buy an adaptor, Apple claims it’ll deliver faster syncing speed and deliver a host of other benefits customers will like. Plus, it’s smaller, giving Apple more leeway with its product designs.

There are other features that Apple have made such as replacing the headphone with a more in-ear type that is suppose to deliver a more clearersound that reduces outside noise considerably. Apple has added a new navigation App that allows should blow Google maps out the water.

The major point is really do I shell out for a new hand set on the 21st September release date that in essence is really just a bigger version of the 4s, in my opinion, it is also worth mentioning that a simple update to Apple’s IOS6 should help deliver better performance from your existing 4s rather than paying a massive  £529 -  16gb, £599 – 32gb or £699 – 64gb versions.
Powered by