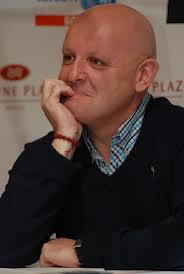 So DOUGIE before we start I would just like to say a big thank you for two things firstly sending me a copy of your brilliant
new book "wings of a sparrow" and secondly agreeing to do this interview.

Wings of a sparrow is a different type of football book than you normally write, why did you decide to write a comedy as
opposed to a grittier novel?

This isn’t actually my first comedy novel as I’ve written a couple in the past. The Geezers Guide to Football and Billy’s Log both feature football and did really well.

I actually wanted Wings of a Sparrow years ago but had to shelve the idea because my publisher at the time didn’t think that there was a market for it. Indeed, their reaction was one of the reasons I moved away from traditional publishing into epublishing because I knew that there was an audience for a book of this style and I knew that by self-publishing, I could finally reach them directly.

The irony is that Wings has been such a success that it’s now being brought out in paper format!


Where did you get the idea from for "wings of a sparrow"?
It is simply based on one of those conversations all fans have in a pub or a car on the way back from a game. That ‘what would you do if you won the lottery’ type scenario.

The key was to put it into a scenario which would allow me to take the reader into areas which they might not have considered before.

Is the story based on any particular football rivalry?
Oh yes. It’s no secret that it’s based on the rivalry between my own club Watford and our non-league neighbours up the road. I was actually going to name the clubs in the book but L*t*n wouldn’t agree to let me use their name and so I was forced to use a more generic team name. One more reason to dislike them, as if I needed one!

I could really relate to Rob / Charlie & Rob / Mick's relationships, is that based on your own personal relationships or did it the relationships just build during the writing process?
There are certainly elements of people I know in all of the characters but whilst I had worked out the basic dynamics of the various relationships prior to starting work, their individual characters kind of developed as the book went on.

I think that’s fairly standard when you write fiction in the way I write because you’re actually getting to know the characters as you create them. As a consequence, when you begin to write the second draft, you’re far more familiar with them so know what they would say and how they would react in any given situation. That makes it easier to write and, I hope, more honest.

In the story Rob sees himself with a dilemma of possibly becoming the new chairman of his bitter rivals, if you were put in that position would you take the job like Rob or walk away?
If the circumstances were the same as in the book, I’d take it in a heartbeat. But there are certainly things I’d do very differently to Rob as I’m sure there are for everyone who reads it.

That’s the joy of a story about football because everyone has ideas of their own. Then again, that’s the joy of football generally. We all think was can do things better than the people who are actually doing it!


Can we expect more of this style of book from you in the future?
I certainly hope so but that’s largely down to my readers. Indeed, one of the great joys of epublishing for me is that it puts me in much closer contact with the people who read my work and as a result, I can react quite quickly to any feedback they might provide. Primarily, that means I have a much clearer idea of the type of thing they want me to write and so if they want more comedy, that’s what I’ll give them.

In the book Rob's wife is quite harsh in her treatment towards Rob, is she based on anyone in particular?
Oh yes! Next question...

As the book goes on Rob really becomes a lovably rogue was that your original intention for his character or did it change as you were writing the book?
Absolutely and I’m delighted to see that you picked up on that. I love the idea of characters changing as a story unfolds and that was always going to be the case with Rob.

I wanted him to be the kind of bloke we all know and would be happy to have a beer with and I hope that I’ve achieved that.


Has writing a comedy made you want to write more books like this?
As I say, I’ve written comedy before and in fact my novel Billy’s Log is very similar in tone to Wings. Indeed Billy’s Log is probably as close to an autobiography as I’ll ever write as there so much of me in it! That’s why I’m so looking forward to writing the sequel.


If you are approached to allow "Sparrow" to be made into either a movie or one off TV program would you agree and if so who would be your choice for Rob?
That’s already happened so I pretty much know who will play him anyway but can’t say much about it yet.

I’ve written the script myself and it sticks quite closely to the book although I have beefed up his wife’s role so that we can attract a more high-profile actress.


If you could would you consider a different ending for “Sparrow”?
Originally, the ending was going to be very different but the lads who read all my stuff before it goes to print universally preferred this ending because, as they all said, ‘that’s what I’d do’ and that’s good enough for me.


In my opinion Rob has unfinished business at City, can we see him return to City in the future?
If the demand is there for Wings the return, I’d certainly be more than happy to write it. I already have a few ideas in mind.


What does the future hold for you in terms of new projects?
At the moment, aside from working on scripts for various films, I’m writing the sequel to my thriller Top Dog and after that I’ll be writing the second instalment of Billy’s Log which will pick up ten years on from the original.


Thanks again for doing this interview I hope you have enjoyed the interview, finally one last question what is your favourite book you have written and why?
This will shock a lot of people, but of the fifteen books I’ve written my actual favourite is a short book I released last year called The Art of Fart.

It was actually never meant for publication at all as I only started writing anecdotes to amuse myself whilst working on a very heavy movie script. But by the time I’d finished the screenplay I had about 14,000 words and so I spoke to my publisher and he told me to finish it.

I can honestly say, I laughed more whilst writing that book than I have ever laughed whilst doing anything.