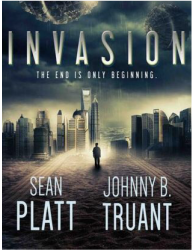 This isn't really my normal genre of book but with all the recent Sci-Fi books and movies recently I thought what the hell I will give it a shot and my word how glad I was, this isn't even what I expected but I won't say to much why although I will says it seriously left me thinking what lengths would I be prepared go to to protect my own family. It's also worth mentioning that this is a series of novels so don't expect

Set in the near future Invasion is a Sean Platt & Johnny B Truant Sci-Fi / dystopian tale about an impending Alien attack and one families quest for survival before the invasion begins,
Meyer Dempsey is wealthy man who through many successful business ventures has been able to provide well for his family so when the initial contact is made Meyer is already at an advantage to a lot of the worlds population Meyer has already prepared for what he knew was coming
Dempsey has always been a good farther too his two children Lila and Trevor from a previous marriage to Heather but Meyer isn’t such a great husband to Piper, he’s been seeing his ex wife a lot in fact, he’s still sleeping with her. Piper sense’s that Meyer & Heather have a bond and she sort of suspects they are more than just ex’s but she still loves Meyer even if he’s older then her so she chooses to blank it out most of the time. On the day that NASA first identified the objects some 200 or so of them heading fast towards Earth society initially didn’t fear anything apart from Mayer who had been planning for this day as a result of visions he had when ever he Heather took ayahuasca a tropical vine from Amazonian regions noted for its hallucinogenic properties. Meyer had already begun to construct a ranch in Vail Colorado with a Bunker for this day. The bunker was stocked with all the provisions the family would need until the event passed or so he hoped. Meyer and his family set off for the airport where his private jet was fueled and ready to get them to Vail well in advance of NASA's projected contact with the aliens in 7 days, but before they can reach the airport they receive news that the FAA has grounded all flights until further notice, Meyer and the family are forced to make the trip by road hoping to reach there destination before the country falls in to chaos.

This is a brilliantly written book & Invasion is a roller coaster ride that is a truly well written book that left me wanting learn more of the story with each chapter. If the rest of the books in the series are as well written as this and can keep the reader wanting more this could turn out to be a truly amazing series of books.