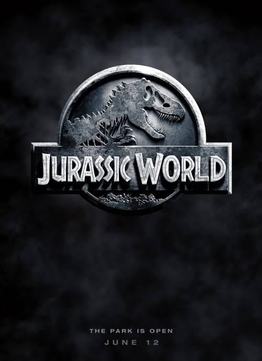 It's been 22 years since Steven Spielberg's original Jurassic park (1993) movie that stared Jeff Goldblum, Sam Neil and Richard Attenborough to name but a few. It was a ground breaking movie in its day a huge success that it was followed by 2 more movies the Lost World & Jurassic park 3.

Jurassic World is the latest movie in the franchise and is now directed by Colin Terevorrow. Twenty-two years after the incident in Isla Nublar, Jurassic World is a new, fully functioning dinosaur theme park located on the island. Brothers Zach (Nick Robinson) and Gray Mitchell (Ty Simpkins) go to visit their aunt Claire Dearing (Bryce Dallas Howard), the under park's operations manager who is under pressure from the board to reinvent the parks popularity in a time when children see dinosaurs as just another animal but when the boys get there Claire is too busy trying to get sponsors for the parks next future attraction a Hybrid dinosaur Indominus Rex to meet the boys and she leaves them in the hands of her P.A much to the annoyance and disappointment to the boys who haven't seen there aunt for many years.

Clare is asked by the parks owner Simon Masrani to get some expert advice on the new Indominus Rex enclosure to ensure that everything is in place for when the new attraction goes fully livening a few weeks time, Clare approaches Owen (Chris Pratt) an ex navy seal who's on the island already conducting research into velociraptor behaviours and the possibility of training the species of killer dinosaur. Owen is already attracting the attention of a specialist military company wanting to use raptors in war but Owen knows although he has built a bond with a pack of raptors they are still very much a creature you wouldn't want running loose.

When Clare and own inspect the dinosaurs habitat it appears the dinosaur has escaped when Owen spots claw marks up the enclosure wall he goes in to investigate but it soon becomes clear that the hybrid is far more intelligent than they could ever of imagined. Shortly after the boys arrive on the island the hybrid escapes and Clare is forced to concede that the park is in danger of becoming a PR disaster as it becomes overrun.

Overall this is brilliant movie the effects are awesome and the movie doesn't feel out of place in series especially considering that it come our 20 plus years later, one downside is that the only member of the original movies is B.D Wong who plays geneticist Dr Henry Wu.  If you’re a fan of the original I urge you to go and see this you not be disappointed and if you’re new to the series you'll be hooked and want to watch the original 3 movies. Chris Pratt has already announced that he's signed up to do another movie so look out as we are likely to return to Isla Nublar soon.