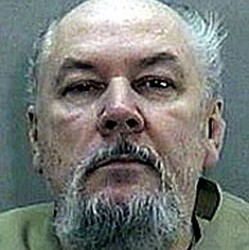 Next in my series of random’s is a man who kept his real job a secret from his wife and kids until his arrest and subsequent conviction, that man was mafia hit man Richard Kuklinski otherwise known in his circles as THE ICEMAN.

Kuklinski was in born in Jersey City New Jersey on 11th April 1935 one of 4 children 3 boys and one girl in a rented apartment on 3rd Street his father Stanley Kuklinski was a Polish immigrant from Warsaw who worked as brakeman on the railroad and his mother Anna McNally who worked in a meat packing plant was the daughter of Catholic Irish immigrants from Dublin.

Kuklinski's child hood wasn't exactly a happy one, according to reports he and his brothers where constantly abused by both his parents but especially his father, in a HBO interview with Kuklinski he described his mother as "A cancer that destroyed everyone" This aside due to his mother’s Catholic upbringing Richard was raised to be an altar boy.

Richard's older brother Florian died at the hands of his abusive father although the other members of the family covered it up by lying to the police and saying that Florian had in fact fallen down the stairs causing his death. Richards’s younger brother was convicted of the rape and murder of a 12 year old girl and when Richard was asked about his brothers crimes Richard replied: "We come from the same father."

In his early teens Kuklinski had established himself as a pool shark who would beat or kill anyone who upset him, this eventually brought him to the attention of Roy De Meo who was a wise guy for the notorious Gambino crime family , De Meo first used Kuklinski for a gangland slaying of a rival although this wasn't the first time Richard Kuklinski had murdered, at the age of 14 Kuklinski committed his first murder when he beat up a local bully to death although there is some debate on the actual murder weapon some reports say it was a club and others say it was a clothes rail from a wardrobe.

Kuklinski and the De Meo crew used a bar in the flatlands borough of Brooklyn called the Gemini Lounge as the headquarters and the scene of some of the crew’s gruesome murders.

In 1960 Richard Kuklinski who was married with 2 young sons met a beautiful girl by the name of Barbara Pedrici who was a secretary at the trucking company that Richard worked at based in Jersey. Barbara and Richard started dating for a while but it wasn't long before Barbara who had never before had a serious relationship was having doubts so she confronted Kuklinski who didn't take the news well and ended up wounding her with a knife, the next day Kuklinski apologised and proposed to Barbara claiming that he would divorce his wife. Barbara eventually married Richard 1962 and 2 years later the couple had their first child a little girl which they named Merrick.

After the birth of Merrick Richard Kuklinski tried to go straight working in a film lab that bootlegged Disney films and later porno films but Richard soon found himself earning extra money by hijacking trucks and wasn't long before he started reaping the rewards of his illegal activities. As the Kuklinski family grew further with the births of 2 more children Christian and Dwayne the family moved to a house on Sunset Street. Even though Richard seemed to be doing very well considering his modest job Barbara never question Richard about his extra money maybe out of fear for his reaction.

By the mid-Seventies Richard Kuklinski's reputation for cruelty and efficiency had spread across the United States, and he was kept in constant employment by the seven families of the East Coast Mafia: including the DeCavalcantes in New Jersey and the Gambinos, the Luccheses, and Bonannos in New York, although Kuklinski lived by a rule that he would never harm either a woman or children which when you think about how treated Barbara especially in the early years of their relationship it seems somewhat hypercritical.

Kuklinski was often used by the mob to execute people who owed the mob money and couldn't or wouldn't pay up, he was also used to murder anyone who was found slagging of the mob of any of its lieutenants but in 1979 he was ordered to carry out the daylight murder of one Carmine Galante, head of the Bonanno family, in 1985 Richard Kuklinski was also part of a hit team the murdered Paul Castellano in sparks steakhouse Manhattan, it is also alleged that Kuklinski was responsible for the disappearance of teamster boss Jimmy Hoffa in 1975 but this has never been proved.

Amid his criminal activities Kuklinski managed to keep his home life away from his mob bosses helping him to
keep what he did a secret from his wife and kids for many many years, Kuklinski was a devoted father who adored his children and wife. Richard was a romantic when it came to his wife and on the occasions he took Barbara out for a meal he would always ring ahead and request that "Lady" by Kenny Rodgers was playing as lady was his nickname for Barbara. Kuklinski's attitude towards Barbara could change in an instant and often did resulting in blackened eyes of a broken nose in fact Barbara actually had 2 miscarriages as a result of the beatings from her husband.

Ironically it was the closest thing to a friend Richard had that proved to be his downfall, Phil Solimene, a local Mafia fence whom Kuklinski had known for more than 20 years when Solimene was part of a police operation that caught Kuklinski conspiring to commit murder and on December 17th 1986 in a joint operation between the ATF and New Jersey state department he was arrested outside his sunset street house.
In 1988 Kuklinski was sentenced to two murders, but found that the deaths were not proven to be by Kuklinski's own conduct, meaning he would not face the death penalty. In all, Kuklinski was convicted of five murders and sentenced him to consecutive life sentences, making him ineligible for parole until aged 110 but on march 5th 2006 on a secure wing at St Francis medical centre Trenton Kuklinski died although no foul play was recorded as a cause of death it is somewhat coincidental that Kuklinski was about to testify against many high ranking mafia bosses shortly until his untimely death! 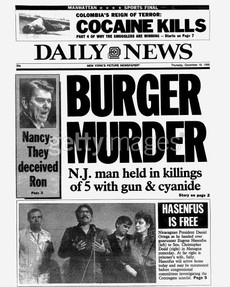