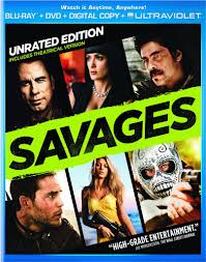 Savages see's Oliver Stone returns for his first film in 3 years after he directed the sequel to "Wall Street"- "Wall Street 2
Money Never Sleeps” back in 2010.

Savages is a crime thriller with a pretty decent cast consisting of Benicio del Toro, John Travolta, Uma Thurman, Aaron Johnson & Salma Hayek. Savages also stars Blake Lively who's character named O short for Ophelia narrates this movie which is not unusual but it really seems to work in this movie.

The film is about 2 boyhood friends from Laguna Beach California "Chon" (Taylor Kitsch) an ex navy seal who smuggles out some seeds on a tour in Afghanistan along with "Ben" (Aaron Johnston) a business & botany student out if Berkeley reinvent the home grown marijuana trade and become the biggest import / exporters of the drug in America but there success has a price the lads become wanted by the Baja a ruthless Mexican Cartel who
want the boys to work with them but when Chon & Ben turn them down the Baja kidnap O until the boys agree to the partnership.

The boys set about doing whatever they need to do to free O from the Baja and with the help of a dirty DEA agent (Travolta) this takes them on a dangerous and bloody war with the cartel. This film is at times violent well the blu-ray version has an unrated version which is the version which I watched and with a  ruining time of a little under 4 hours be sure you are in the right frame of mind when sitting down to watch this.