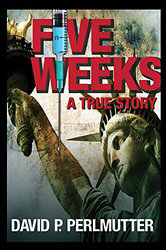 Five weeks by Dave P Perlmutter is tale of one mans journey to America as part of a new job opportunity that should be an adventure of a life time but turns out to be a nightmare.

Dave decides to leave his job as a London estate agent after an unsavoury encounter with a few Irishmen in Islington and after spending Christmas with his girlfriend in Eastbourne they both decide to move to Brighton and start a new life there, Dave answers an add for a head of telesales manger for an American portrait company and too his surprise he's offered the job but there is one snag he needs to spend five weeks in Altoona Pennsylvania America learning the ropes. Dave leaves his girlfriend Jenny behind and sets off for America telling her he'll only be away for five weeks then there new life can begin. Dave arrives in New York where he meets his new boss Michael who for the duration of his training will become his only friend. It doesn't take Dave long to learn that Michael's a coke snorting alcoholic and a womanising creep and that's not the worst of his problems in America in fact Dave's whole life starts to fall apart in those five weeks.

Dave's life has certainly been eventful in fact like his other true story "Wrong Place, Wrong time" Dave's story could quiet easily be a prime time T.V. Show or a blockbuster movie. Dave does a brilliant job of making his book so hard to put down and at times I found myself shouting to my self if that was me I'd do this or I'd do that. This a brilliant read and if you only read one book this year make it this.
Powered by